Warning: Parameter 2 to qtranxf_postsFilter() expected to be a reference, value given in /home/eurocom/old.europaholidayus.com/wp-includes/class-wp-hook.php on line 286
 Netherlands, Austria, Germany & Czech Republic 13 Day Tour - Europa Holiday Tours 
Warning: Use of undefined constant jquery - assumed 'jquery' (this will throw an Error in a future version of PHP) in /home/eurocom/old.europaholidayus.com/wp-content/themes/europa2015/functions.php on line 42


Warning: Parameter 2 to qtranxf_postsFilter() expected to be a reference, value given in /home/eurocom/old.europaholidayus.com/wp-includes/class-wp-hook.php on line 286

<Netherlands>
*Amsterdam~ Amsterdam, famous for its Venice in the north, the canal in the city was planned in the 17th century, and now it is intertwined with the buildings on both sides of the river. Nowadays, in addition to the outstanding diamond crafts, all kinds of creative architecture and daily necessities have made the Dutch design hang on the famous gold signboard.
*Zaanse Village ~ This is like an open museum, the most representative of the windmills
*Asmeer Flower Trading Center ~ the world’s largest flower auction market.
*Amsterdam Canal ~ World cultural heritage site, arranges Amsterdam canal boats, sees World Heritage, and the unique beauty of the Netherlands.
<Austria>
*Vienna ~ one of the famous international cities in Europe. Due to the strong atmosphere of classical music in the city, musicians from all over the world gathered here, and they have the reputation of “world music capital”.
* Schönbrunn Palace ~ The most representative palace of the powerful Habsburg dynasty, the famous Vienna Conference is held in this palace, beautiful interiors, magnificent sculptures, worthy of the imperial capital of the Imperial Palace; The boulevard is like a cornucopia of open-air museum art, and the first-class architects reproduce all of Europe’s most elegant buildings in Vienna.
* St. Wolfgang Lake ~ is connected by twelve large and small lakes, like a string of beautiful pearls, and it looks like a dream. St. Wolfgang on the lake is a charming town with a thousand years of history. In 1965, the Sound of Music, the sound of the Oscar-winning film, was shot in this area.
*Hallstatt ~ Beautiful lakes and mountains, elegant scenery, as if into the paradise on earth is unforgettable, is the birthplace of the Celtic civilization, was included in the World Cultural Heritage in 1997. Take the Hawthorne Skywalk cable car to the top of the hill, and the Skywalk platform overlooks the entire town of Hallstatt and overlooks the small town of Obertraun.
*Salzburg ~ Music Art City is also the hometown of music prodigy Mozart. It is located between the river and the hills. The unique style has a unique flavor. The church bells are always heard all the time. The film “Sound of Music” is also filmed here.
<Germany>
* Kings Lake is located in the Berchtesgaden National Park and is one of the earliest protected areas in the Alps. The lake is emerald green and crystal clear.<Czech Republic>
*Cesky Krumlov ~ Europe’s most beautiful medieval city, still retains the complete 18th century medieval style, was listed by UNESCO as a world heritage in 1992.
* Marinske Lazne ~ is a luxury resort for European nobles. Musicians Chopard, King Edward VII and Austrian Emperor Franz Joseph have visited this place.
* Karlovy Vary – the largest town in the Czech Republic, used to be a hot spring city exclusive to the nobility.
*Prague~ Many people dream of traveling to the place where they live. The beautiful Vltava River flows through the city and is dotted with the scenery on both sides.
*Prague Palace ~ is located in the Prague Castle District. Prague Castle is the largest castle in the world. It is about 570 meters long and has an average width of about 130 meters. The Emperor of the Holy Roman Emperor of Bohemia and the Presidents of Czechoslovakia and the Czech Republic are here to preserve the crown of the Kingdom of Bohemia.
* Vltava River Cruise ~ Vltava River is the longest river in the Czech Republic with a total length of 430 kilometers. It originates from the Bohemian Forest. The cruise ship is also one of the main ways to visit Prague. You can enjoy Prague from different angles.
* Provide one bottle of mineral water per person per day on the coach
* Provide headset service for 15 and more guests per group for better sightseeing experience 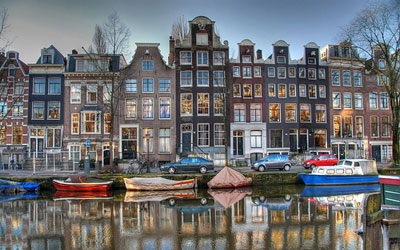 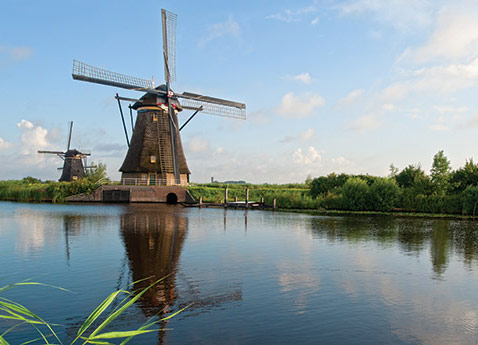 Upon arrival, transfer you to Zaanse Schans not too far from Amsterdam. It has many well-preserved historic windmills and houses. We will visit wooden clog factory, a traditional footwear. We will also visit a cheese factory, then return to Amsterdam and check-in to hotel. 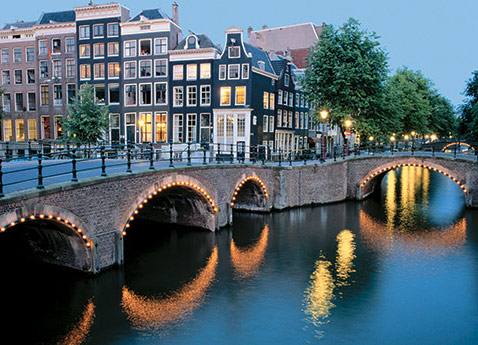 After breakfast, we will visit ★Aalsmeer Flower Auction, one of the largest flower auction in the world. Afternoon, city tour will follow: to ★Diamond Factory, then enjoy ★canal boat ride; you will discover unique monumental buildings and landmarks.(Please note tour itinerary will be modified according to canal excursion schedule) 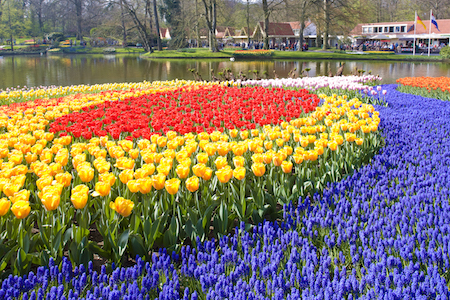 After breakfast, to ★Keukenhof Gardens, located in South Netherlands in the small town of Lisse. The park covers 32 hectares of land. It features many variety of different gardens, flowers and plants.  Afternoon at leisure. 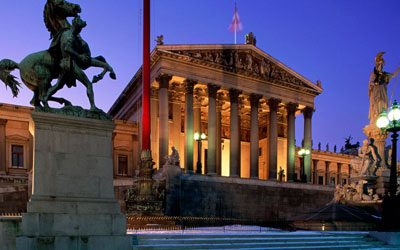 After breakfast, we will fly to Vienna, upon arrival, city tour will follow: to the ★Parliament building with Pallas Athene statue at the front is one of the splendid buildings in Vienna. Walking through the building brings you back to the ancient Greece.  Then to Town Hall, it features five towers including the central tower with height of 98 m.

After breakfast, to ★Schönbrunn Palace, built by Maria Theresa (UNESCO World Heritage site 1996), also known as “beautiful fountain“.  Continue to Hofburg Palace: it was the center of Habsburg empire, housed most of the powerful royalties.  To Belverdere Palace and Garden, one of the world finest baroque palace.  Then to Hundertwasserhaus, it is an apartment house, built by Austrian artist Friedensreich Hundertwasser and architect Joseph Krawina. The colorfully decorated exterior draws attention to many tourist. 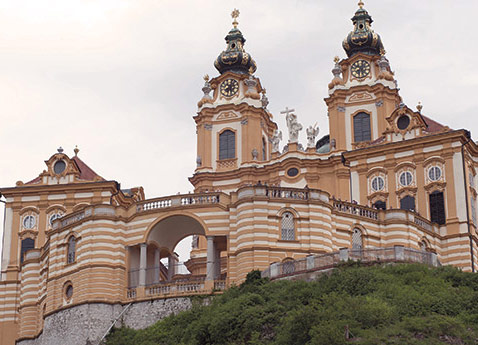 After breakfast, today’s highlight is ★Grand Danube River Cruise to Melk. We will visit Melk Abbey, a Benedictine abbey on a rocky outcrop overlooking the Danube river. Afternoon, to St.Wolfgang. 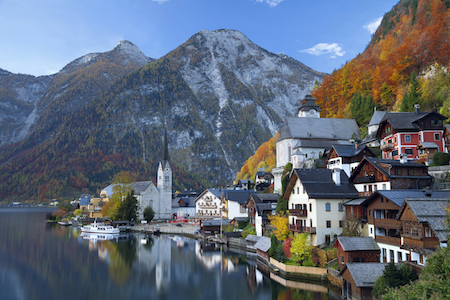 This morning, visit the lake town of Hallstatt, which is a world cultural heritage, is a small town that was developed very early. It was inhabited by the Celts in 900 BC and later became rich because of the rich minerals in the area. Take the Hallstatt ★ Skywalk cable car to the top of the mountain, the Skywalk can overlook the entire town of Hallstatt and overlook the town of Obertraun! Then visit the famous salt mine area, and start a fun and exciting ★salt mine journey of. First take the electric train to the veins, visit the evolution of the salt mine from ancient times to the present, and listen to the interesting salt mine story. You can’t miss the most popular wooden slides. Everyone will hold the front partner and slide into the bottom of the pit. Then drive to Salzburg, the hometown of the Austrian music prodigy Mozart. Take the ★cable car and climb the high-rise standing on the hills of Salzburg Castle, built in 1077, and overlooking the entire city. 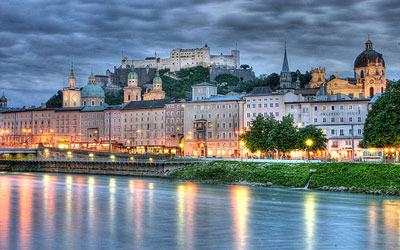 This morning, visit the ancient city that was inducted in the World Cultural Heritage City by UNESCO in 1996. Including the Mozart House, Mozart Square and the film [The Sound of Music] location is in Mirabell Garden, where the Roman sculptures, fountains, gardens and labyrinthine Baroque gardens are gathered. Then head to Kings Lake in the Berchtesgaden National Park, one of the earliest protected areas in the Alps. The lake is crystal clear green lake. In order to protect this cleanest and most beautiful mountain lake in Germany, only electric Boats, hand boats and pedal boats were allowed to sail in the lake. Visit the St. Bartholomew’s Chapel, located on the peninsula of the West Bank. The red dome is onion-shaped, and the special shape has become the symbol of Kings Lake. Special arrangements to ride the ★boat, when the electric boat is on the way to the other side, the captain will stop the boat and play the horn on the lake surrounded by the steep mountains. The short notes are played under the baptism of the mountains. Far-reaching, pure and clear multi-echo, the atmosphere is beautiful. 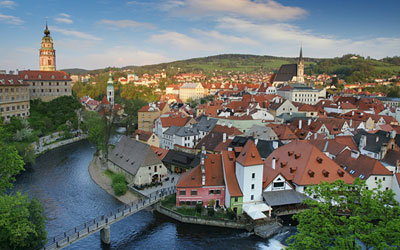 After breakfast, travel to Cesky Krumlov, Czech Republic. We will visit Cesky Krumlov Castle, which has Gothic, Renaissance and Baroque elements, covers 11 hectare garden and an 17th century baroque theater. You can see panoramic view of the old town and the river from the top of its round bell tower.  Afternoon, to Hluboka Castle, a historic chateau and one of the most beautiful castles in Czech Republic. 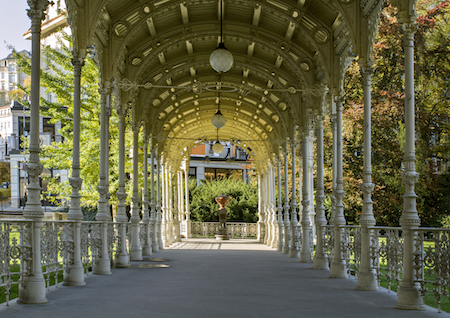 After breakfast, depart for Marianske Lazne, a spa town, surrounded by mountain forest, mineral springs, green parks and noble houses. In 19th century, many celebrities and high European rulers came here to enjoy the hot springs. Continue to Karlovy Vary, also a famous spa town in the west Bohemia region of the Czech Republic. It numerus thermal springs have made it popular. The riverside spa district is home to several colonnades with columned walkways. The modern hot spring colonnade has the geyser, which spouts up to 12 meters high. Afternoon, depart for Prague, upon arrival, to Dancing House, designed by Frank Gehry on a vacant riverfront plot. 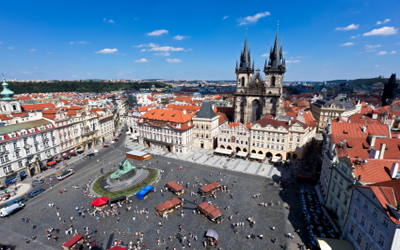 After breakfast, city tour will follow: to ★Old Royal Palace, the residence of Bohemian kings.★St.Vitus Cathedral which took nearly 700 years to complete. Continue to ★ Golden Lane, where you will find many tiny colored houses. House No. 22 was the residence of Franz Kafka, the famed Czech-Jewish writer. old town square, where you will see famous astronomical clock, it announces every hour with 12 apostles passing by the window above the astronomical dial and with symbolic sculptures moving aside. Then to Charles Bridge with many baroque statues, among the most notable sculptures are St. Luthgard, the Holy Crucifix and Calvary. After dinner, ★take Vltava River Cruise, enjoy spectacular view along Vltava River. 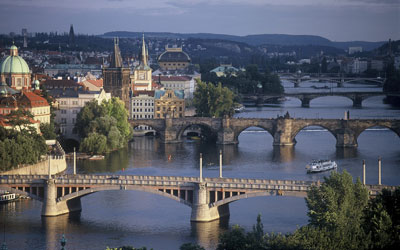 This morning, transfer to airport for home bound flight to US and ends this unforgettable journey.

Tour Fare Excludes: International Airfare, Personal expense, any expense not included in our itinerary, Tips: euro 10 per person per day, Visa Fee, Travel Insurance (If full payment paid 60 days prior to departure date, we offer medical travel insurance for US residents only)

** If you purchase air ticket on your own, your arrival time to the first destination and your departure time from last destination to U.S. must be the same as our group. If not the same, you must arrange your own transportation to meet group and to airport on the last day **